The Yellow Fever Epidemic of 1878 was one of the most important events to occur in Holly Springs, and resulted in the deaths of entire families, the loss of businesses and fortunes and the near extinction of our town. Myths and legends of the Yellow Fever continue to be told in Holly Springs and beyond over 140 years after this tragic event.

The Yellow Fever Tour and Symposium is free to the public, though donation to the Museum are requested.  The Museum is located at 305 E. College Ave, in Holly Springs, Mississippi 38635.  Parking is available along College Avenue near the Museum.

If you have further questions or concerns, please email us at phillip@yellowfevermartyrs.com.

“The Legend of the Yellow Fever Mass Grave” 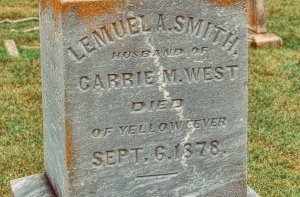 The Michelly Painting is one of the most unusual and enigmatic artifacts in the Yellow Fever Martyrs Museum.  The portrait, of Christ at the Crucifixion, supposedly dates to 1858, the year after the church building was moved across town and re-consecrated as St. Joseph’s Catholic Church.

The origins of the painting are shrouded in legend.  According to the most common version of the story, a lone traveler arrived at St. Joseph’s Church in 1858, on a Saturday morning, wearing what looked to be medieval (or very old) clothing.  The traveler, weary and starving, asked if he could rest for a time inside the church.  A visiting priest from Memphis, who was cleaning the church at the time the mysterious traveler arrived, readily agreed, and also provided the traveler with food and access to the small bedroom shed located in back of the church.

Before the visiting priest left the church, the traveler stated that he would create a religious painting to hang in the church, as thanks for the church and the priest’s hospitality.  At the time, the Catholic church in Holly Springs was relatively poor, and there was little money to spend on church decoration.  The priest smiled at the traveler’s generous offer, knowing that the man almost certainly did no have the skill- not to mention the materials nor the time- to create such an ambitious painting.

Three weeks later, the visiting priest returned to Holly Springs and St. Joseph’s Church.  The traveler had vanished, which did not surprise the priest.  Inside the bedroom shed, the priest found a large roll of parchment.  After unrolling the parchment, the priest was shocked and delighted to find the large painting of Jesus Christ’s crucifixion.  The priest asked neighbors and frequent guests to the Church if they had seen the mysterious traveler or witnessed the creation of the painting (which would have undoubtedly taken many days).  No-one in Holly Springs had ever seen the traveler.  The generous man had seemingly vanished, leaving behind the magnificent painting.

At the bottom left of the painting is a statement, written in Latin: “A. F. Michelly, fecit A. D. MDCCCLVIII”, which translates to “A. F. Michelly had this made, in the Year of our Lord, 1858.”  Based on this statement, it seems likely that the painting was created by Alexander F. Michelly (died 1860), a “professor of painting” who was a faculty member at the Aberdeen Female College in the 1850s.  Michelly, who taught both art and languages at the College, was married to J. N. B. Michelly, also known as “Madame Michelly”, a Spanish-born (some sources say she was born in Cuba) teacher who also studied art and languages.

In the late 1850s, when the Michelly Painting was created, A. F. Michelly was a teacher at the Franklin Female Institute in Holly Springs.  It seems likely that A. F. Michelly painted the portrait for the newly-instituted St. Joseph’s Church in 1858.  Michelly died in Natchez, Mississippi on October 11, 1860, and was buried in the “Catholic ground” (likely in the Natchez City Cemetery, though his grave is unmarked today).  Michelly’s widow, “Madame Michelly”, eventually moved to Texas, where she joined the faculty of Savoy College in the 1870s and died sometime after 1880. 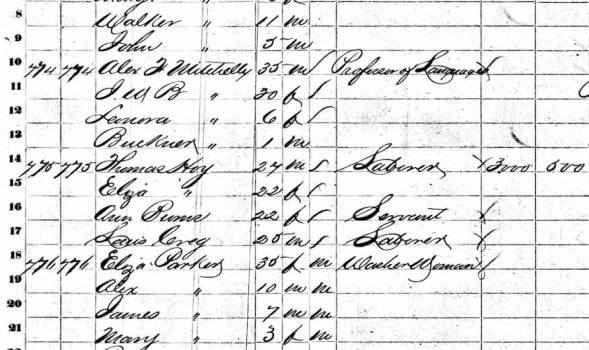 The painting is in the hard-edge academic realism style, combined with a touch of Romanticism, which was a popular style in the 19th century.  The artist would have been familiar with Baroque paintings, particularly the works of Peter Paul Rubens.  The style is decidedly “painterly”, where the colors are less sharply delineated and more blended, combined with the dramatic contract of dark and light.

While the origins of the Michelly Painting will likely always be shrouded in mystery, the painting has remained in St. Joseph’s Church (and later the Yellow Fever Martyrs Museum) for over 160 years.  It remains one of the most unusual artifacts not just in the Museum, but in Holly Springs.

The analysis of the painting is courtesy of Dr. Fred Albertson, an Art History professor at the University of Memphis.  The information on A. F. Michelly and his wife, including census records, comes courtesy of historian Bob Franks with the Itawamba Historical Society.  Many thanks to Dr. Albertson and Mr. Franks for their help in studying and understanding this painting!

Detail of the Michelly Painting

Detail of the Michelly Painting

A $2 donation for admission is requested.